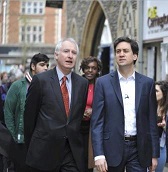 Ed Miliband’s speech to Labour Conference could have been written for Cambridge, says Cambridge Labour Parliamentary Candidate, Daniel Zeichner. As one of 6 key pledges, Ed Miliband promised that in the next 10 years, he would work to ensure that Britain is a world leader in green technology, with a million additional high technology jobs. With Cambridge at the leading edge of clean-tech technology, Mr Zeichner says that Cambridge will be key to delivering Labour’s vision:

Ed Miliband’s speech today could have been written for Cambridge. The promise to make Britain a world leader in green technology puts Cambridge at the heart of Labour’s vision for our economic future -; with high quality, well-paid jobs the key, rather than the race to the bottom that we have seen in recent years. Reforming the outdated House of Lords, enfranchising young people, and doubling the number of homes for first-time buyers will resonate with many in Cambridge. Finally putting apprenticeships on an eqaul footing with universities could be transformational -; but will require a big response from many of our companies. It is in their interest, but will take active Government intervention, which only Labour will provide, to make it happen.

Mr Zeichner particularly welcomed the promise on constitutional reform, having moved the amendment at Labour Conference in 2000 urging Labour to lower the voting age to 16; as a key member of Labour’s campaigning group to reform the House of Lords which secured significant advances in Labour’s policy position this year; and as a long-time campaigner for devolution of powers to regions and structural change in local councils:

It is now quite clear that if Labour wins next year we are going to see sweeping change to our politics -; about time too! Nothing has been achieved by the Coalition in the last five years, and it can’t wait any longer. The current system is broken -; it falls to Labour to work in a non-partisan way to build a politics fit for the twenty-first century.