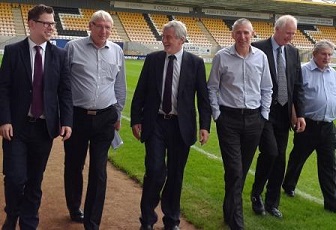 Shadow Sports Minister Clive Efford MP was in the city visiting Cambridge United to hear about the exciting work being done by the club with local young people, and in particular, Jez George’s epic Mission 676 fund-raising ventures. He was invited by Cambridge Labour Parliamentary Candidate Daniel Zeichner, who is pictured with Abbey Councillor Richard Johnson, Chairman Dave Doggett and Dave Matthew-Jones from the Supporters Trust.

Clive also heard about the challenges facing the club in securing a move to a new stadium or upgrading the Abbey – with the club making great strides on the pitch, the politicians were left in no doubt about the urgency of a resolution.