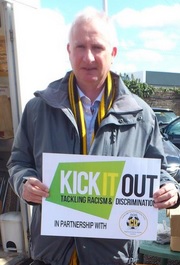 Cambridge United are determined to kick prejuice off their stands – and season ticket holder Daniel Zeichner was proud to back their campaign at the Accrington Stanley game on their “Kick It Out day”.

The campaign aims to tackle all forms of discrimination.

Dave Doggett, the club’s chairman, said: “The campaign is aimed at highlighting all of the unacceptable prejudices that still exist within a civilised society.

“It never fails to puzzle me why the simple principle of treating people with the same respect you expect from them is not universally accepted.”

Daniel Zeichner said: “There is no place in football for racism, sexism or other forms of discrimination. This is an important initivative which has my 100% backing.”