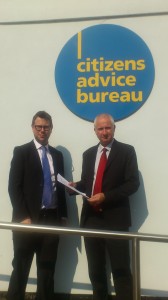 The cruel impact of the Government’s welfare reforms on some of the most vulnerable people in Cambridge is now clear, says Cambridge Labour Parliamentary Candidate Daniel Zeichner following a meeting with key advisers at Cambridge Citizens Advice Bureau.

Mr Zeichner and Councillor Richard Johnson visited the Cambridge and District CAB in Devonshire Road in response to detailed research carried out into the impact of welfare reform on people in Cambridge and surrounding areas. The report includes a number of case studies detailing the impact of a range of controversial changes, including the Bedroom Tax, the Benefit Cap, the move to much more punitive sanctions on people seeking employment, and examples where people are now left with absolutely no money for weeks at a time.

Mr Zeichner says that the objective and independent report justifies the fears expressed by critics of the changes:

The evidence is very clear. The rushed and ill-conceived changes are having a dreadful impact on some of our most vulnerable fellow citizens. People are waiting for months for assessments, through no fault of their own, and left penniless in the meantime. They are being sent for assessments to centres many miles away, with no means of affording transport. People are being sanctioned and left without support when mistakes are being made by the Job Centre. A system that should be there to help and support people is instead punitive. Most people in Cambridge will be unaware of what is happening -; this report spells out the truth, and it is shameful.