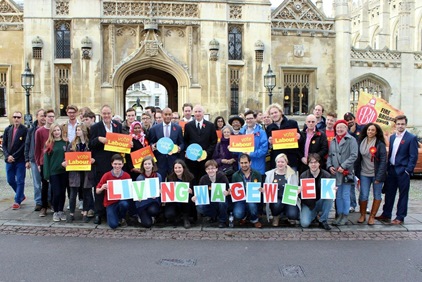 Labour Shadow Business Secretary Chuka Umunna was in Cambridge on Saturday morning to launch the Living Wage Week. He joined students and local living wage campaigners to congratulate King’s College on implementing the Living Wage and to urge others to follow suit.

He was invited by Cambridge Labour Parliamentary Candidate Daniel Zeichner, who attended King’s as an undergraduate, and has run a long-running campaign for a Living Wage in Cambridge: “National Living Wage week this year comes at a time when there is growing evidence that with wages static, more and more people are being left behind, even in a prosperous city like Cambridge. Some employers, like King’s, have shown that with the will, the Living Wage can be implemented, and we applaud them for that, and urge others to follow their good example. The evidence is clear – ending low pay isn’t just good for staff, it helps employers because absenteeism falls and fewer staff leave. Higher pay for low-paid people boosts the local economy and reduces the cost of in-work benefits to the tax-payer. It is a win-win policy, that will be pursued by the next Labour Government, but in the meantime we will press major employers in Cambridge to put their house in order and end low pay.”

Fred Cotterill, Chair of Cambridge Universities Labour Club, said:
“Cambridge University has a duty to pay its staff enough to live on. Students and employees have made great progress working together for a goal that makes Cambridge a stronger city in which everyone has a stake. While poverty pay endures, the Labour Club will campaign to end it.”