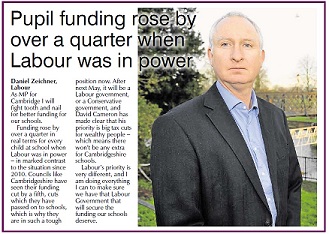 The Cambridge News interviewed me today about my views on school funding. Here is what I said: “As MP for Cambridge I will fight tooth and nail for better funding for our schools.

Funding rose by over a quarter in real terms for every child at school when Labour was in power -; in marked contrast to the situation since 2010. Councils like Cambridgeshire have seen their funding cut by a fifth, cuts which they have passed on to schools, which is why they are in such a tough position now. After next May, it will be a Labour government, or a Conservative government, and David Cameron has made clear that his priority is big tax cuts for wealthy people -; which means there won’t be any extra for Cambridgeshire schools.

Labour’s priority is very different, and I am doing everything I can to make sure we have that Labour Government that will secure the funding our schools deserve.”