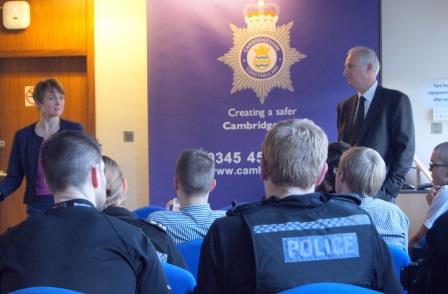 Crime is changing, not falling, and we shouldn’t be complacent -; that was the message from Cambridge police officers and staff to Shadow Home Secretary Yvette Cooper today. Invited by Cambridge Labour Parliamentary Candidate Daniel Zeichner, Ms Cooper heard that police are spending much more time dealing with domestic abuse and cyber-crime, with growing complaints about abuse and bullying through social media.

Officers and staff warned that with rapidly changing technology, many of their colleagues did not have the background, training or up-to-date technology to tackle this effectively and cautioned that this will be a growing challenge in future. Ms Cooper confirmed that Labour will abolish Police and Crime Commissioners and use savings alongside smarter procurement to safeguard 1000 police posts threatened under current Government plans.

Mr Zeichner assured them that Labour in Cambridge will work closely with them, and says that tackling domestic abuse starts with changing attitudes, including altering the school curriculum to include discussing relationships and abuse, which the current Government has refused to do.