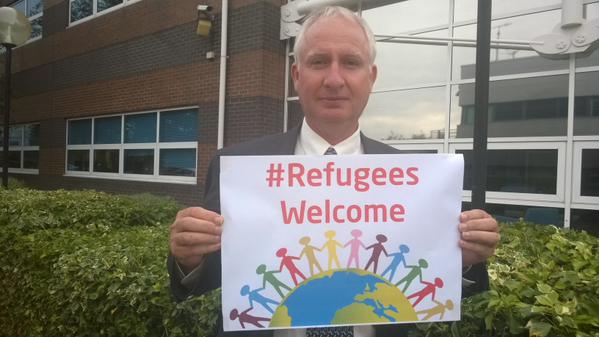 The last few weeks have seen increasingly harrowing stories of refugees fleeing their homeland and crossing Europe in fear.  Children have drowned, families have been stranded with nowhere to go, people have suffocated to death in traffickers’ lorries.  Every one of these journeys has been traumatic and Greece, Italy and Hungary are now struggling to cope with the thousands of desperate refugees.  Our heart goes out to them all.

In the face of this humanitarian crisis, much of the international community has responded by opening their doors and agreeing to offer sanctuary to more refugees, and many sporting, religious and cultural organisations have expressed their support for their government’s offer to take more refugees.

We believe that the goodwill of the British public and our country’s great tradition of humanitarian support means that many people in the UK would want to offer the same welcome to refugees after the unimaginable hardship they have suffered.

That’s why I’m urging Cambridge people and groups to show their support this weekend and over the coming weeks by displaying banners and signs with the simple words #refugeeswelcome. If you would like to download and print a sign please click here.

This Monday I will be tabling an Early Day Motion in Parliament which reads:

Is appalled at the humanitarian crisis unfolding on the doorstep of Europe and urges Her Majesty’s Government to honour and follow in the great traditions of the United Kingdom by accepting many more thousands of genuine and desperate refugees caused by the greatest displacement of people since world war two; notes that as part of the Vulnerable Person Relocation Scheme, Germany has pledged to resettle 30,000 refugees whilst the UK so far taken approximately just 200; further urges the Prime Minister and Home Secretary to rekindle the spirit of the Kinder-Transport and bring forward innovative ideas like a Voluntary National Homes Register for those citizens able and willing to accommodate the most vulnerable refugees; and finally commends the work of the many of thousands of people from all political persuasions across the country who share a desire to offer refuge and hope to those escaping great hardship, violence and terror from across the world”

Please ask your friends and family from outside Cambridge to urge their MP to sign the motion.

This is an issue that transcends party politics.  We hope you will feel able to support this idea so that we can show the British public and refugees themselves the strength of feeling in this country.