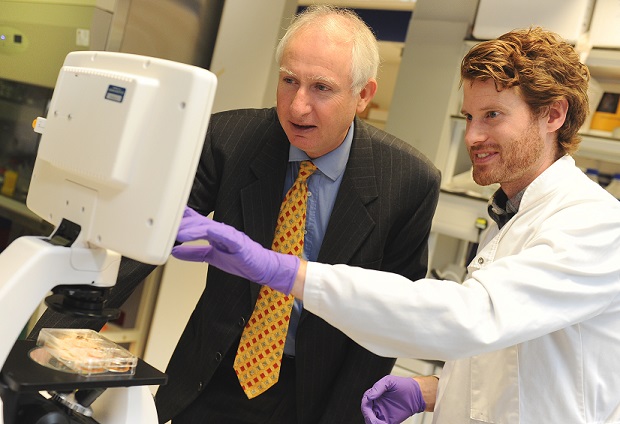 Daniel Zeichner MP discovered how the Alzheimer’s Research UK Stem Cell Research Centre is playing a key role in the fight against dementia when he visited the Cambridge facility.

Alzheimer’s, the most common cause of dementia, leads to the loss of brain cells and impairs the brain’s ability to function properly. Early symptoms include problems with memory and thinking, but as the disease progresses, physical functions such as walking and even swallowing can be affected. There are currently no treatments capable of stopping or slowing the disease, and scientists at the Stem Cell Research Centre, backed by the UK’s leading dementia research charity, are working to address this problem.

During a tour of the centre, Mr Zeichner learned how skin cells donateSPB_6652d by volunteers with different forms of the disease play a crucial role in this research. Scientists at the centre transform these cells into networks of functioning nerve cells, allowing them to replicate the disease in a dish. These cells can then be used to study how the disease develops, as well as to screen compounds that may help fight the disease.

Mr Zeichner said:
“Too many people still think that dementia is an inevitable part of getting older – it isn’t. We now know that it is a disease and that we will be able to treat it – and that’s what the scientists at the Gurdon Institute in Cambridge are working on, with tremendous support from Alzheimer’s Research UK. They showed me how skin cells can now be turned into stem cells which allows detailed research and testing of new treatments without the use of animal experiments. It is all extremely positive – but there is a cloud on the horizon: decisions are looming about future science funding in the Government’s financial review next month. It is vital the the long-term political consensus on stable science-funding is maintained. 1in 3 children born this year will develop Alzheimer’s. Dementia costs us over £26 billion a year. It is our greatest health threat . This vital research must not be put at risk.”

Dr Rick Livesey, who leads the work at the Stem Cell Research Centre, said:
“We were delighted to welcome Mr Zeichner to learn more about the vital work being carried out at the Stem Cell Research Centre. The techniques we are using were pioneered right here in Cambridge by Nobel Prize-winner Sir John Gurdon, whose work has revolutionised our ability to study diseases like Alzheimer’s. By recreating the disease in the laboratory in this way, we have already been able to shed new light on its causes, and have an invaluable tool to help identify which potential new treatments should be taken forward for further testing.”

Dr Matthew Norton, Head of Public Affairs at Alzheimer’s Research UK, said:
“The Stem Cell Research Centre is just one of many groundbreaking initiatives Alzheimer’s Research UK is funding, and we were delighted to be able to show Mr Zeichner how the money we raise is being put to work. With 850,000 people currently living with dementia in the UK, including over 8,000 people in Cambridgeshire alone, the need for effective treatments and preventions for the condition has never been more urgent. Dementia is our greatest medical challenge, and it will take all of us -; charities, Government and industry -; to tackle it.”